The SCM revolutionized the performance of contamination surveys when it was introduced more than 20 years ago.  Today it is widely recognized throughout the nuclear industry for its superior production rate while satisfying the DQOs of characterization, free release, and final status surveys.  It has consistently saved our clients time and money, while meeting or exceeding both site-specific and statutory performance criteria and minimizing the risk of future liability.

This state-of-the-art system uses a large area Position Sensitive Proportional Counter (PSPC) that is capable of establishing where along the detector an event occurs (NUREG/CR-6450). This allows a long detector to be divided electronically into a continuous array of small, virtual detectors that are similar in efficiency to other counters, but have backgrounds associated with small area detectors. This results in improved sensitively and specific identification of the location of the radioactivity along the detector anode wire.

The SCM is operated in either the rolling (dynamic) or corner (static) mode.  In the rolling mode, the SCM automatically logs information for each 5 cm of forward travel and for each 5 cm increment along the width of the PSPC (25 cm2 areas). Since data are recorded in 25 cm2 pixels over the entire surface surveyed, the SCM records 400 measurements for every square meter it traverses.  Hence, a survey of a 2,500 m2 area would consist of 1 million measurements. Each 25 cm2 area is then combined as 1/4th of four separate 100 cm2 areas. This technique ensures that the highest 100-cm2 area is identified because it is not sensitive to mispositioning of the detector as may occur using more traditional systems that employ multiple non-overlapping detectors.  Scan speed is motor controlled and the distance the SCM travels is measured by a precision wheel encoder. Controlling the survey speed and automatically logging survey data eliminates errors and uncertainties associated with surveys performed with hand held detectors. Furthermore, support wheels hold the detectors at a fixed height from the surface which eliminates uncertainty associated with scan height. Corner mode is used to survey areas that are generally inaccessible or impractical to survey in rolling mode, such as corners, stairs, and facility components. 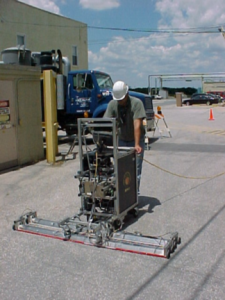 Advantages to Using the SCM: